emerging from the cave

…just as the eye was unable to turn from darkness to light without the whole body, so too the instrument of knowledge can only by the movement of the whole soul be turned from the world of becoming into that of being, and learn by degrees to endure the sight of being, and of the brightest and best of being, or in other words, of the good.      –from Plato’s The Allegory of the Cave

I seem to be making my way out into the light these days. I spent so much time last week writing the birth story that I neglected to write what was happening in the moment. There was a lot of good, but I have been having a hard time with the dreaded baby blues. A few days after we came home, it started. I had these crying jags throughout the day. Anxiety would set in after I got up in the morning and would revisit me a few times each day. I couldn’t laugh, could hardly smile, and I was getting scared.

Some of this has been linked to missing my pregnancy–mourning it even. I loved being pregnant, even when it got hard. It was the best I’ve felt in my life, as though I had finally found the right skin. Then, suddenly, I was no longer pregnant, and even though I had the fruits of that pregnancy in my arms, I no longer felt like I was in that right skin. Hell, I didn’t recognize my body at all. It doesn’t resemble the body I had before I was pregnant because I’m much thinner, and it certainly doesn’t resemble my pregnant body. It just felt foreign. I found myself touching my belly only to burst into tears because my big, taut, pregnant belly was no longer there. It was sad. I worried my wife. I worried myself. Was I becoming obsessive? Probably.

I’m finally finding the other side of that though. We have had visitors this week, and we’ve had some outings, and I’m beginning to feel a little more controlled, even, and normal–and I don’t cry when I think about my pregnancy. I think I became transfixed with the act of becoming. I was becoming a mother. The wee one inside of me was becoming a person, but like the poor prisoners in Plato’s cave, I was only seeing shadows of what was to be. After Baby Genius’ birth, I was suddenly thrust into that glaring sunlight. I went from becoming a mother to being a mother, and I wanted to go back. But as we all know, there is no placing a baby back into one’s belly as much as we wish we could. Once they’re on the outside, they’re there to stay, and coping with the reality of that can be more than a little overwhelming. I’m giving myself a break now, and I’m accepting that while this being business is a lot harder than I ever thought it would be, it’s also pretty damn rewarding in itself. It is a skin that can fit me just as well.

Life with a Baby Genius is, in a word, beautiful. We have certainly had our challenges, but he really has been a great baby thus far. After our first few painful days of breastfeeding, he’s now a pro at latching on, and we’ve managed to engage in some pretty advanced breastfeeding maneuvers, like walking while feeding, nursing in public, and more. We’re even starting to get the hang of the side-lying hold. He eats with such vigor and enthusiasm, and he sometimes makes this little growling noise as he latches on. When he’s finished, he pops off, coos, and then throws his arms behind his head and basks in his milk-drunkedness with a half smile on his face. Sometimes I expect him to pat his belly. I love nursing this baby, and even though there are moments when I wish I could eat dinner uninterrupted or sleep a few more hours or finish typing with two hands, I find myself looking forward to our nursing sessions and getting to stare at his cherubic little face.

We’re also beginning to work out some semblance of a nighttime routine. BG usually wakes up twice to be fed, and while he feeds for a good long time, he also tends to give me a good stretch of sleep in between. We just stay in bed and nurse. J fetches diapers so that we can change him, feed him, reswaddle him, and put him back in his basket. Last night was an exception though. He wanted to eat every hour and a half. I hope this doesn’t become the new normal, but if it does, we’ll cope.

Figuring things out does help with feeling more normal, as does doing a few grownup things. My parents came to visit yesterday, and they treated us to lunch–by ourselves. J and I got to go on a lunch date while the grandparents watched the baby. It was wonderful. We took ourselves to our favorite pub where I was able to have a Guinness for the first time in, well, ten months. We held hands and talked about the future, and we both felt like we were seeing the world with new eyes. I suppose we are.

We also had a dear, dear friend come to visit the other day. She’s been out of the country for six years, and we haven’t seen her in four, so to have a visit with her and to be able to introduce her to our son was just lovely. Because we still have only a couple of friends in this town, we haven’t had the stream of visitors that many do upon having a baby. In fact, it’s been downright lonely at times. Having someone here who has known J and I for so long, who knew how badly we wanted a baby even eight or nine years ago, was such good medicine. We went to a winery and our favorite farm, and then we had a picnic–BG’s first! Our friend cried as she held Baby Genius; she photographed him copiously; she celebrated this new existence we have. It was so special. We need a lot more of that.

All of these little things are helping me come out of those murky shadows I was living amongst for the last couple of weeks, and I’m relieved to be returning to the world. I’m recovering physically (although my poor girly bits still smart from time to time), and I’m starting to see that I’ve got a new body to work on firming up. That’s going to be fun. Tomorrow, I return to work, which simply means I spend a few hours a day on the computer here at home, but it also means mental stimulus, a bit more routine, a bit more normal.

I always knew that having a newborn was going to be hard. I guess I just didn’t know which parts would be the hardest. Surprisingly, it’s not the caring for him or the lack of sleep; it’s not even learning to be a family of three instead of a couple. No, I think I’ve been the obstacle, the hurdle to clear, and that is something for which no book or class can prepare oneself. Now that I’ve figured this out, I’m ready to go on with enjoying my baby, my beautiful little family. I’m ready to emerge as a mom. 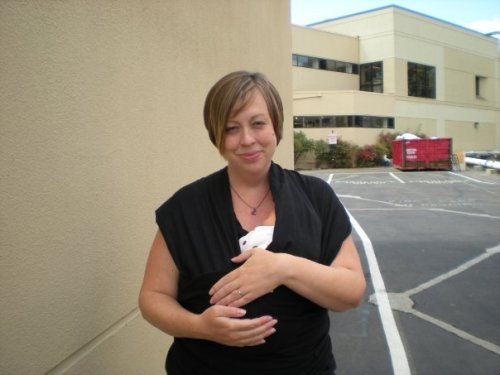