J and I returned yesterday from an impromptu weekend getaway for Pride. Our county held its Pride festival in a new location this year, in a small riverside town that is a gay male hotspot. We love this little town for its quirkiness and for its proximity to both the river and the redwoods, which we both sorely miss these days. So, when we learned that Pride was being held there, we entertained the possibility of going and then camping in the redwoods for a night.

I have to be honest. We almost didn’t go, and it was because of me. I had a fair amount of anxiety about going camping. This was likely going to be our only trip this year, and our last trip as just a couple, so I felt that if we didn’t go, I would feel a good deal of remorse. Still, the anxiety was pretty overwhelming, so much so that I almost called the trip off the day before we were to leave. So many things fed into this: I wouldn’t be  having a few beers to help me sleep at night; I wouldn’t be comfortable sleeping; I might feel a bit too vulnerable; I wouldn’t be able to do my usual heavy lifting, and J would have to pick up the slack (I’m usually the muscle in our relationship). I couldn’t believe how scared I was and how worked up I had gotten myself.

The day before we were to leave, I awoke at about five in the morning, and laid there worrying about it. When J woke up, I began talking to her about it, voicing my fears. Soon enough, we were pulling out the camping gear, pairing things down so they wouldn’t be as heavy, and getting ready. She knows quite well that if she can get me to move forward that I typically snap out of it, and I did. She brought me extra pillows and insisted on a little ben.adryl to get me to sleep. Somehow, I was going along with it and was going to be okay.

And so, on Sunday morning, we packed up the car, and we drove West toward the little gay town on the river. When we arrived, the lightposts all had American flags with little gay flags under them.

All of the local businesses had gay flags and various Pride decorations in their windows. 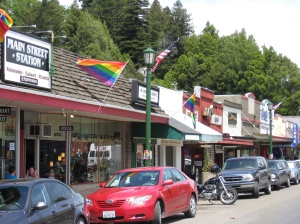 It was still early, so we ventured to the area where we would be camping to secure a site. The drive in is through an old growth grove of redwoods, and then one is required to traverse a very narrow, steep, windy one-lane mountain road. We made our way up and up and up, past so many beautiful vistas, but toward the top were the most breathtaking.

Once at the top, we made our way through the campground and found ourselves in a clearing where we soon discovered the bullfrog pond after which the campground was named. 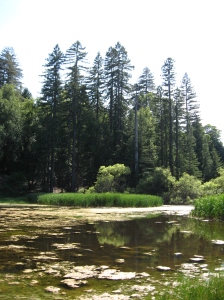 This was also where we found our campsite, a perfect little spot where we were able to pitch our tent directly beneath a redwood. 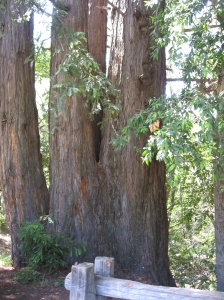 We were thrilled to discover that not only were we very close to a restroom, but that we seemed to be the only people camping in this entire clearing (where there were five other sites). It felt like we had the whole pond, the whole campground, to ourselves. Needless to say, it was difficult to want to leave to go back to Pride, but we had promised ourselves we would–plus, we still needed firewood.

Off to Pride we went, where I was the token pregnant lesbian in a see of gay men. The celebration was held on the lawn of a resort, and it was quite festive. We enjoyed people watching, dog watching, kid watching, but after a bit of food and perusal of the various goods for sale, we were ready to go back to camping away from the people and festivities and noise.

When we returned, we settled in. We played some cards, took a walk around the pond, made a fabulous dinner over the fire, and simply enjoyed being out there by ourselves. Throughout the afternoon, three or four lesbian couples came to have romantic moments by the pond, and we were certain we would have camping neighbors, but we never did. At night, everything was quiet except for the owls and bullfrogs. It was beautiful. Sleeping was challenging, as I knew it would be. My hips ached all night, and I flipped from one side to the other throughout the night. I did sleep though, and by sunrise, J and I were ready to get up and enjoy our own slice of the outdoors for ourselves again. 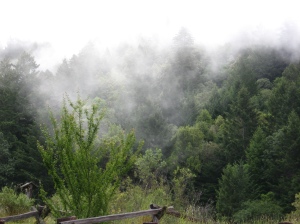 Each of us took her own walk around the pond, encountering all kinds of wildlife from deer to turkeys to ducks and the frogs themselves. J had found me a walking/fire stick the night before, and she insisted I take it with me on my walk around the pond. It was so lovely taking this little hike by myself with just my camera, my coffee, and a stick. It was therapeutic. I was so proud of myself that this more rugged T that has always loved being in nature still existed, that even though I’m busy growing this baby, I still had plenty of strength and energy to hike and build fires, and I still had the peace of mind to enjoy the beauty of this place.

This was such an important revelation for me to have at this point in my pregnancy. So much lore around us says that pregnant women are fragile, and I have resented this, but at the same time, there was part of me that had started to embrace it. Not now. Sure I need to take life a little slower, accept the help that is offered to me, and avoid doing things that are utterly reckless, but I needn’t stop being me so long as I’m still capable of doing so. As the coming months make me slower and a little more dependent, I need to be able to hang onto this.

We wrapped our very short trip up with a hike through the redwoods later that morning. We felt so close to one another, so happy to be where we were. The redwoods always make us feel home, and we enjoyed them so much.

As we walked, we fantasized about our camping trips next year with our baby boy (yes, we’ll be those crazy parents), the hikes through the redwoods he’ll enjoy throughout his life. It brought us so much joy to picture our little family making new meaning of something we have always loved as a couple. And with that, we ended our last camping trip as a couple, all filled up with love and hope and eager anticipation for what the years will bring. 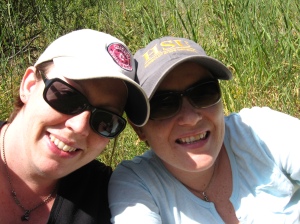